On May 1st, International Workers' Day, Portland labor, immigrant, and community groups will come together to demand comprehensive immigration reform. Organizers aim to connect the many issues facing workers and the poor.

Portland, OR-- April 15, 2010 – To celebrate International Workers' Day, thousands will gather on Saturday, May 1st at the South Park Blocks (SW Park and Salmon) at 11am. After two hours of entertainment and speakers, the march will kick off at 1pm.

Jobs For All: This year's march comes in the middle of an economic crisis that has hit Oregonians with more than 10% official unemployment. Real unemployment is much higher, considering the number of people working part time and those who have given up searching. Combined with a shrinking state budget, social services such as housing, public transit, and education are facing stiff cuts just as these services are needed most.

Immigrants' Rights Are Workers' Rights: In 2006 forty thousand people in Portland marched in opposition to the virulently anti-immigrant Sensenbrenner bill (HR 4437). Immigrants' rights advocates continue to demand an end to ICE raids and detentions. They are calling for an end to the expansion of 287(g), which has led to rampant racial profiling and human rights abuses by using local police forces as immigration agents, most notably in the case of Sheriff Joe Arpaio of Arizona.

Police Accountability: While an increasing amount of law enforcement resources is devoted to immigration control, Portland and surrounding communities have seen a rise in incidents of officer-involved shootings and police brutality. Recent abuses have been against the most oppressed populations: African Americans, Latinos, and the homeless. The march and rally will highlight our common interest in preventing further violence.

International Workers' Day began in the United States in the 1880s around the fight for an eight-hour work day. Since then it has spread around the world and continues to serve as a time for celebration and inspiration to millions. This is the tenth year of the Portland march since its rejuvenation in 2000.

The Portland May Day Coalition is made up of grassroots community organizations, labor unions, faith communities, and individuals. It formed in conjunction with the Portland Immigrant Rights Coalition (PIRC) and Jobs with Justice (JwJ).

To volunteer, endorse, or donate, email: maydayoutreach@gmail.com
Posted by Anonymous at 10:38 AM 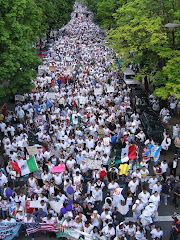